Measure W empowers voters to get more involved in our own county’s governance. It will cost the county very little since county services to be provided for the Charter process are already in the county's fixed monthly costs. The recent fiscal analysis from the CEO, Carmel Angelo, was based on unsubstantiated assumptions and worst-case scenarios. It was rushed through and published before Supervisorial review as a ploy to garner opposition based on fallacious facts and figures.

The entrenched elites who stand to lose the most are in the strongest opposition to Measure W. Most of the Charter Commission candidates have pledged to put the future charter onto a general election so it won’t cost the county extra. In addition, the rest of the CEO’s fiscal analysis is based on assumptions of the Board of Supervisors granting generous perks to the Charter Commissioners, hiring highly paid experts and consultants, paying rent for meeting spaces, and all 47,000 Mendocino voters asking for a complete copy of the charter draft delivered by mail. It was certainly in the interests of CEO Angelo, the highest paid public servant in the county, to draft a fiscal analysis of prohibitive proportions. She is included as one of the entrenched elites. Should our current government officials be too apprehensive to let the people write their own charter and participate in democracy?

Measure W is in accord with Article XI of the CA Constitution and does no more than elect charter commissioners to create a draft county charter for consideration by voters at a future election. Any expenses of the charter drafting process will be determined entirely by the Board of Supervisors. What is the cost of democracy anyway?

Published in the Mendocino Beacon, UDJ and Willits News <http://www.willitsnews.com/opinion/20160603/opinion-measure-w-responses-to-ceos-fiscal-analysis>.

Honest and accurate reporting by the Mendocino Beacon

By Zoe Yudice, This email address is being protected from spambots. You need JavaScript enabled to view it., @MendocinoBeacon on Twitter

As election time is nearing, the Charter Project of Mendocino has encountered some opposition to the charter initiative, particularly from The Employers Council of Mendocino County, which has raised concerns about costs and the potential outcomes of the charter form of local government.

In February, the Charter Project gained enough signatures to place Measure W on the June ballots, which asks voters: shall a charter commission be elected to propose a Mendocino County Charter?

From the start, the Charter Project have been centering their campaign on what can be written into the charter including stopping ‘illegal foreclosures,’ strengthening of local environmental ordinances and, one of their main focuses, creating a county bank.

This has led to a lot of discussion about the feasibility and costs of these issues. It has even prompted the Board of Supervisors to approve an informal cost analysis of the impact of a charter county initiative.

“We had to change our messaging a little bit because we realized that we weren’t in a position to campaign for any of these issues,” explained Doug McKenty, member of the Charter Project of Mendocino County, “We don’t have a business plan, and we don’t have a feasibility study. We can’t campaign on that, and it is premature anyway because we don’t even know who the charter commissioners will be.”

Measure W is not about what is going into the charter, but about giving the charter commission the opportunity to write a charter, at which point commissioners will be looking at what the people want to see included and the cost and feasibility of these issues, explained McKenty.

“We should just be talking about the process of the charter and the pros and cons of home rule and that is it because that is all that Measure W is about. All the rest of the conversation is hypothetical,” said Doug.

With the passage of Measure W, Mendocino County would go from a general law county to a charter county, which would allow Mendocino County to write and adopt its own charter under the California Constitution, defining the power and functions of elected officials, as well as the organization and procedure of local government.

“We can break away from the one-size-fits-all format and we can write something that works for our community. It is more specific for the needs of the community here instead of using a blue print that the state gives you, which is the general law county, and because Mendocino County will be legally its own individual we can make more of our own choices that will stand up in court or other negotiations with the state or with corporations because corporations are also charters,” said McKenty.

If Measure W passes, the charter commission will then begin the task of writing the charter, and once drafted it will be brought before the voters for approval.

“This is about giving us a chance. It is not the final word. You will get a chance to vote later, and that will be the real debate. Right now there is nothing to be afraid of because there is nothing there. It is just an empty box,” said McKenty.

Another issue raised by The Employers Council of Mendocino Council is the cost of associated with forming and managing a charter commission.

According to McKenty and Wyner, all research and time spent on drafting a charter will be conducted by the charter commission hopefully with some help from county counsel.

“The concerns about expense are really off the mark in the sense that expenses aren’t necessarily there. All the commissioners are volunteers, they already have the rooms for us to meet and they already have the county counsel, who is being paid anyway,” said Keith Wyner, member of the Charter Project.

“We want to protect the county. We don’t want to have extra expenses for the county,” said Wyner.

Fiscal Impact of Measure W from the County CEO

The first thing to understand about this fiscal analysis is that it is written by someone who has a lot to lose.  Those whose job descriptions could be rewritten by a charter, like CEO and BoS, aren't going to risk having that power taken from them.

The bulk of the low-ball estimate of costs to the county for Measure W is in the estimated of hours for services of the County Counsel at $246/hr. and county administrative staff at $333/hr.  Both County Counsel and county administrative staff get paid the same monthly salary no matter what they do.  They are our public servants.  How much does Democracy cost?

It also makes assumptions about how many voters will want copies of the entire charter once, in the future, it will be ready for the ballot.

The medium estimate includes a small travel stipend to the Charter Commissioners, hiring expensive outside consultants and 10X more of the County Counsel's time at $246/hr. all at the discretion of the Board of Supervisors.

The highball estimate is just in the case the county has to step in and micro-manage the charter drafting process.  One wonders what would authorize that sort of intervention?  The Board of Supervisors can legally submit their own competing charter.

Additionally, it adds in the cost of a minimum of 25 community meeting at $100/each; that would be lovely.  And another 50% more of County Counsel's time. And some very generous benefits for the Charter Commissioners including up to $500 in incidental expenses per meeting, $thousands for space rental, and per diem meals for Commissioners.  No wonder its so high! 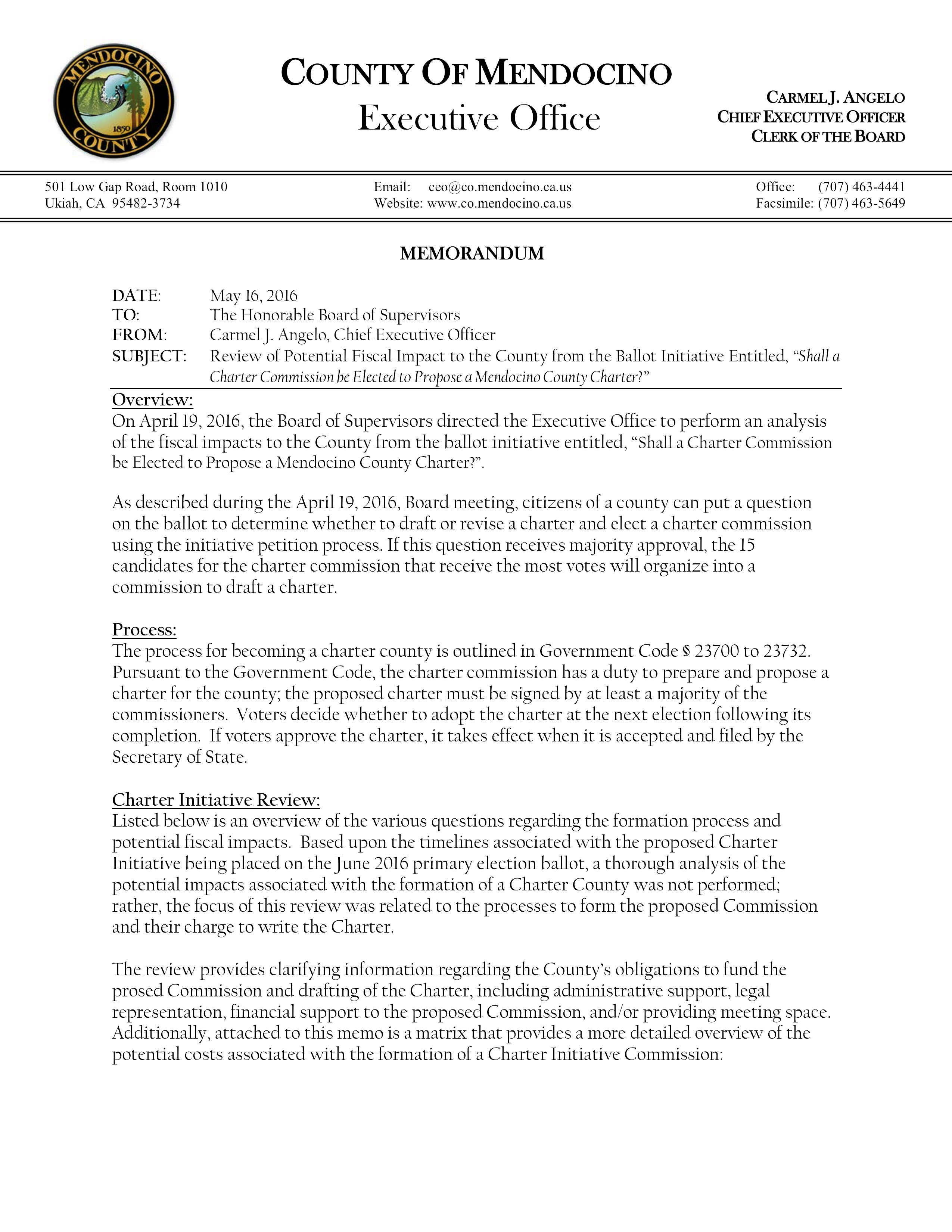 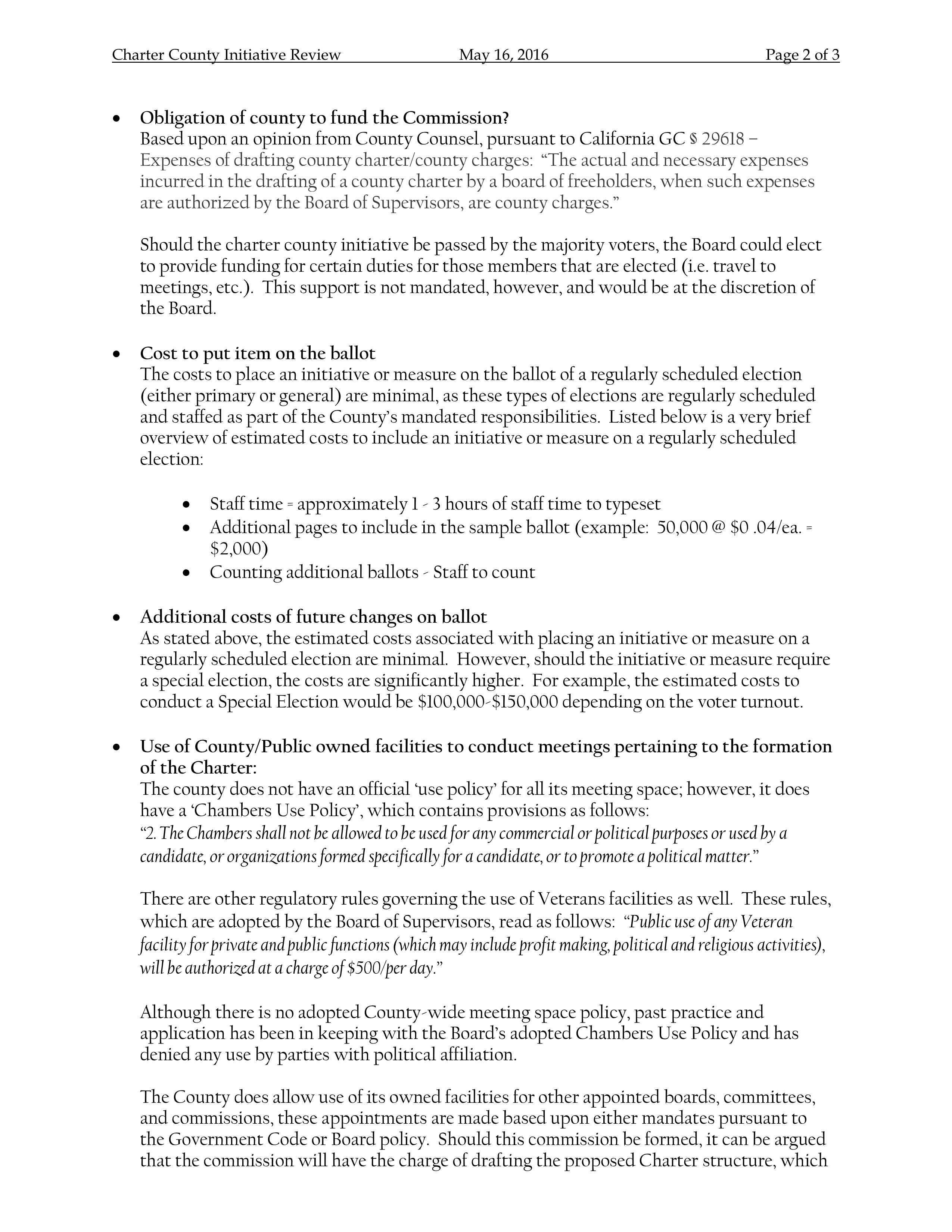 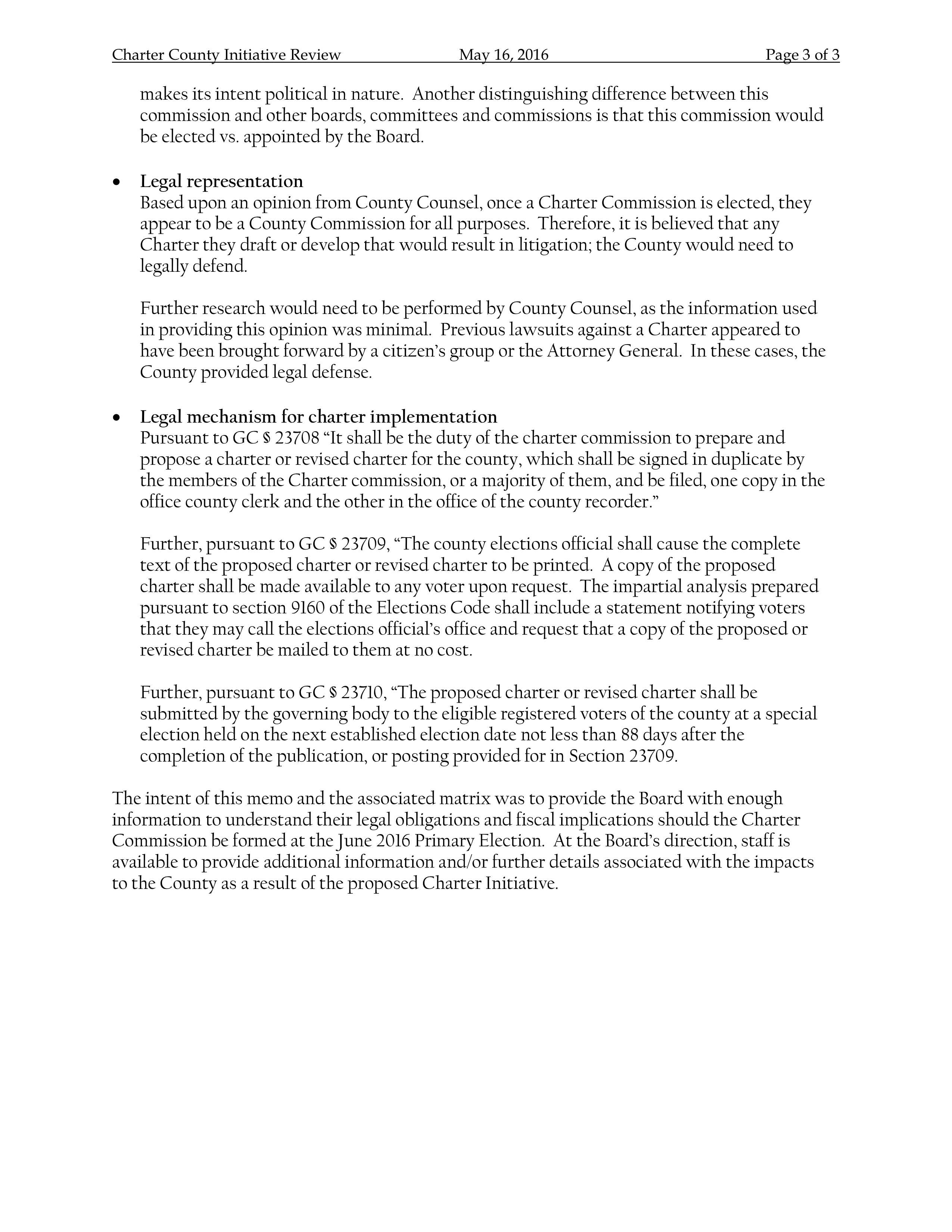 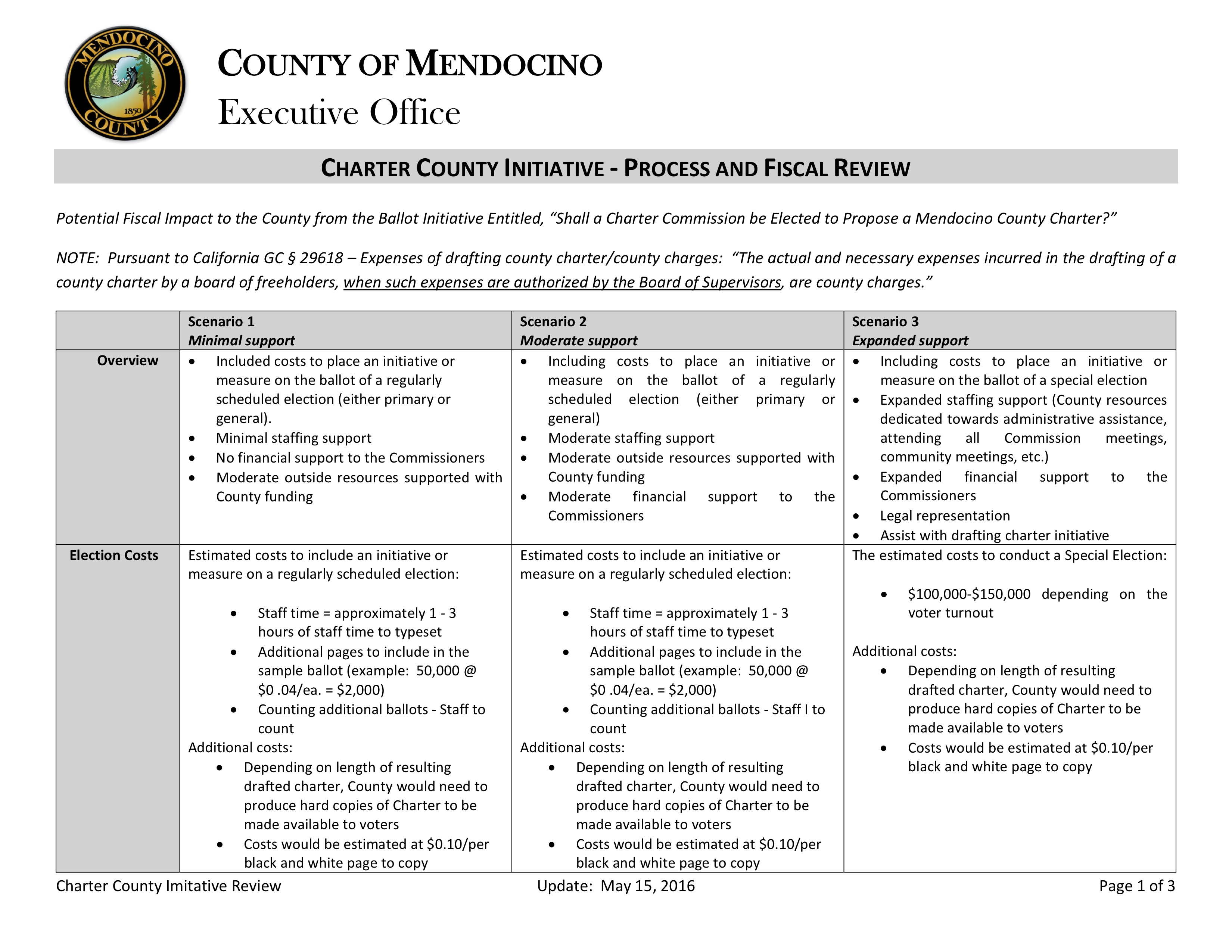 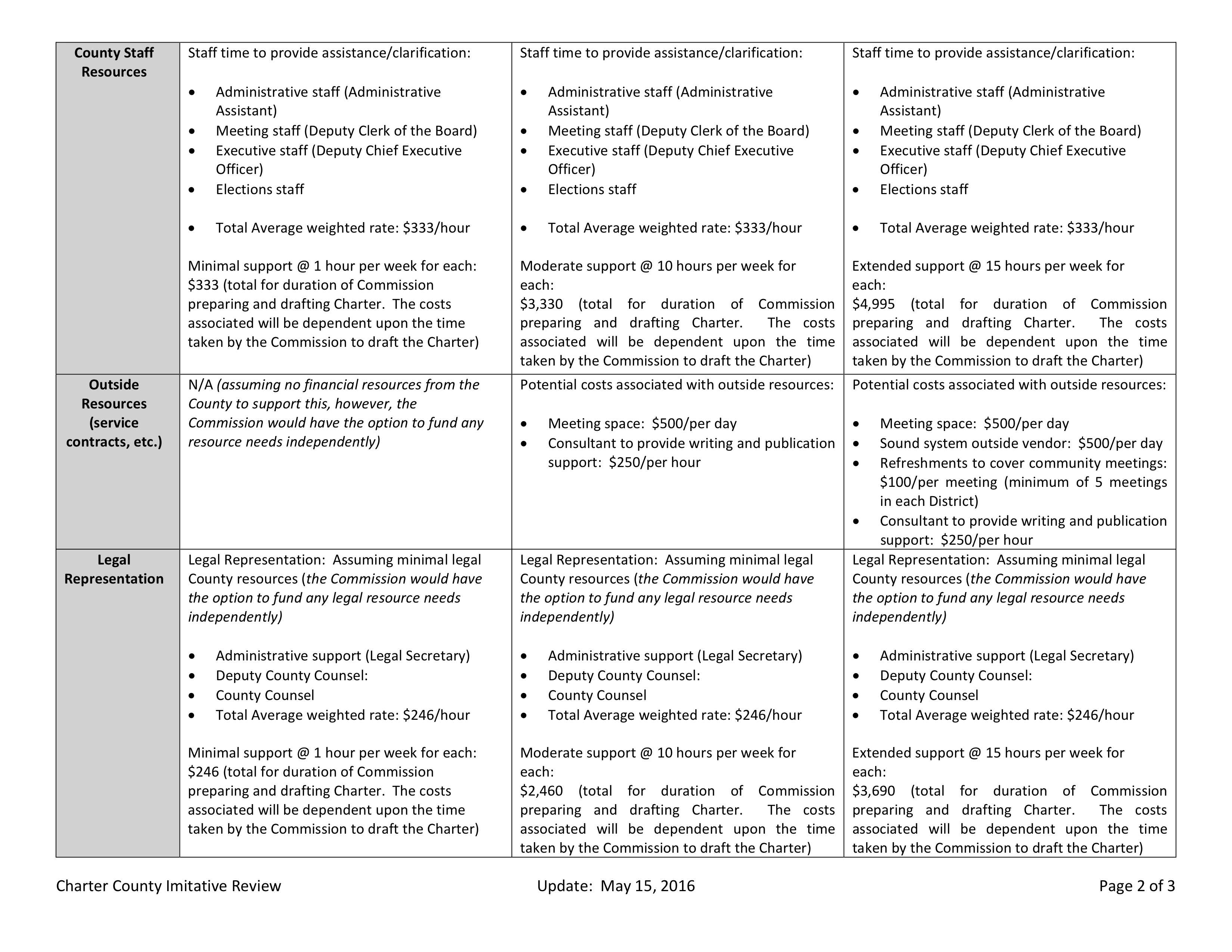 LTE by Mary Zellachild in the Willits News

For a charter county

Many people ask proponents of Measure W what’s the purpose of a charter and why we want Mendocino to become a charter county. Those are fair questions.

The dictionary defines a charter as a document granting certain specified rights, powers, privileges, or functions from the sovereign power of a state to an individual, corporation, city, or other unit of local organization.

Looking back through history, one of the most famous charters was the Magna Carta, which established for the first time that the king, as well as everybody else, was subject to the law. That particular charter in 1215 was a compact to settle grievances between the English barons and King John. Although most of the text was rewritten within 10 years, the principle that the ruling power can’t ignore the raised voice of the people has remained.

So what meaning does that piece of history have for us today as we come up to the June election? For me, it’s a good example of the way things change over time, and the necessity for finding new solutions as new situations arise. What doesn’t change is that it’s always up to the People to claim and reclaim their right to have a say in the way they are governed.

It’s important to note that voting for Measure W does not create a charter. It’s just a statement that we would like Mendocino to become California’s 15th charter county. On the same ballot we can vote for the 15 people who will become charter commissioners and write a draft charter which will be voted on by the citizens of Mendocino County in a future election.

After being elected, the charter commissioners will gather input from people all over the county as to what they would like to have included in the charter. Legally, a charter can include all provisions not in conflict with the State’s Constitution. And once the charter is passed, these provisions have the same force and effect of legislative enactments.

Voting Yes on Measure W is a recognition that Mendocino is a unique county with its own specific needs that aren’t necessarily being served as a one-size-fits-all general law county. Voting yes will help open the door to participatory democracy.