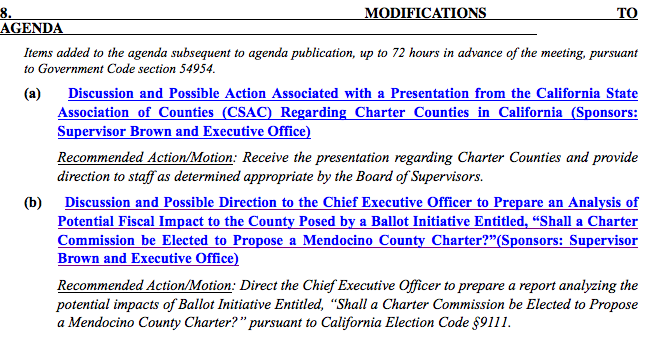 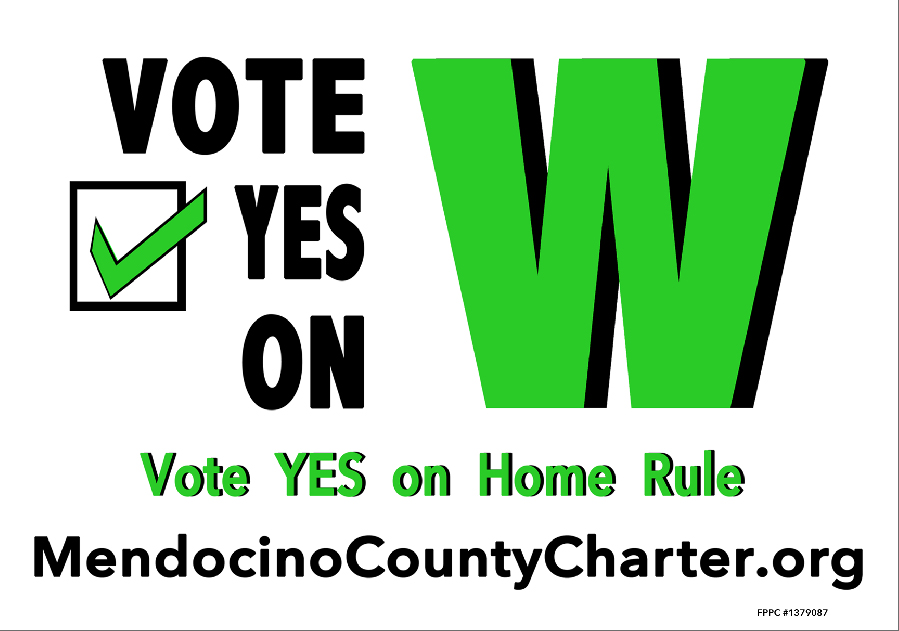 By Loran Lewis, This email address is being protected from spambots. You need JavaScript enabled to view it.

More protection from corporate interests and control over local political decisions were a couple of the benefits that advocates of a charter county system presented during a town hall meeting March 22.

About 30 people attended the meeting at the Redwood Valley Grange Hall and heard from two candidates for charter commissioner and Will Parrish.

“We, as a charter project in Mendocino County, are working toward financial and economic independence by making Mendocino a charter county on the ballot,” said Robin Sunbeam, a charter movement founder and commission candidate.

“We would like Mendocino to become a charter county so we can have more control over the issues that matter to the people that live here and so that politicians in Sacramento have a little less influence over our local unique needs.”

The charter drive comes in two parts: The first is passing Measure W and electing a commission to develop an actual charter that sets the rules for home governance; the second part would be voter approval or rejection of that document, once completed.

The charter movement has placed Measure W on the June 7 ballot. That measure asks voters, “Shall a charter commission be elected to propose a Mendocino County charter?” Along with that, it asks voters to select 15 members of the committee from among 17 candidates on the ballot. If Measure W is approved, the commission would set about the task of creating a charter.

“The most important aspect of being a charter county, I think, is that it is the best way within the current system of the California constitution to empower the individual citizens of Mendocino County as much as possible,” said Doug McKenty, a cohost of the event and commission candidate. “Charter law is the most powerful type of law the county can produce that puts it on equal footing, we believe, with the corporations we might be negotiating with.”

McKenty said becoming a charter county would give Mendocino more leverage to negotiate with corporations that might want to expand into the county.

On that issue, Sunbeam noted the recent effort by Dollar General to open a store in Redwood Valley.  “We live in a capitalist nation,” Sunbeam said. “If a chain store wants to move into Redwood Valley, we can put into the charter that it has to comply within limits.”

Among those limits, she said, might be restrictions on selling products that have been produced in countries with slave labor, on genetically modified products or on companies that do not follow basic union principles.

Parrish, the keynote speaker for the evening, provided examples of how local control can be ceded to interests outside the county. He cited examples of the Redwood Valley’s loss of water rights to the Sonoma County Water Agency and forest rights to the Louisiana Pacific Corp.

He said other entities took the lead in harvesting the benefits of “cheap nature” for their own benefits rather than the benefit of local residents, noting the area used to have 125,000 to 150,000 board feet per acre of redwood lumber, but that is down to about 10,000 per acre now.

“Are we, here, better off because the forests got cut, economically or otherwise?” Parrish asked. “I would say ‘not’ because I think that there is this race to the bottom of sorts that happens with the kind of competition for these resources and this exploitation of cheap nature.”

He said 500,000 acre-feet of gravel has been mined from the Russian River, which has become a “subsidy for road construction in the Bay Area and other areas” but has depleted the river’s aquifer.

One example of what a progressive charter commission could accomplish, Parrish said, would be to focus on issues such as this to redefine a conversation on the population’s relationship with the local environment.

Along with Parrish’s comments, the audience heard from two candidates for the commission, Jed Davis and Sunbeam.

Davis is an aquaponic farmer who has been living in Mendocino County since 2002 and has been active in fighting unlawful foreclosures.

He told the audience of his work in trying to get the county to resolve some of the foreclosures he believes were illegally obtained. Having gotten little accomplished through those efforts, Davis said he became active in the attempt create a charter county that would create more local control over county officials’ actions.

Sunbeam said she got involved as a local activist when she realized “the economy had robbed her sons of a future.”

One of her primary interests, Sunbeam said, was creating a public bank that would allow the investment of county money locally. She said most of $250 million in county money goes into Wall Street banks. In pursing the potential for creating public bank, she said she learned that Mendocino County would have to become a charter county to do so. Now she said she is pursuing that effort as a first step.

Fourteen of California’s 58 counties have become charter counties. Becoming a charter county creates more of a home-rule impact for county actions. Legislation passed by the county would have the same weight of laws passed by the state Legislature.

A charter county has the capacity to tailor laws more specifically suited to its own environment and population. During her speech, Sunbeam said as an example, a charter county could eliminate money from outside the county being used to finance local political races.

Examples cited in campaign literature include stricter mandates for recycling in Alameda County, term limits for elected officials in Los Angeles County, and no charge for candidate statements on voter pamphlets in Santa Clara County.

A Willits town hall meeting is scheduled for Sunday, April 17, at Little Lake Grange from 4 to 6 p.m.

The Charter Project of Mendocino County is proud to announce that 17 candidates from all over the County are running for Charter Commissioner. Voting YES on Measure W in the June 7th presidential primary will create the Charter Commission. You get to vote for 15. The 15 candidates with the most votes will be elected.

Measure W asks the county, "Shall a Charter Commission be elected to propose a Mendocino County Charter?” If approved by the voters, a commission of elected volunteers will draft a county charter to be affirmed by the voters in a future election.

A charter is like a constitution, but for a county. California is a “home-rule” state, which means it affords cities and counties the opportunity to increase their independence with a home-rule charter. If approved, Mendocino will become the 15th Charter County in California.

The following are the dedicated volunteers that would like to redesign our county government structure to empower the citizens, protect our rights, increase Democracy, and lift the county governance out of a quagmire of paralysis.

You can read more about them on our "Meet the Candidates" pages:

Reporter Zoe Yudice give the Charter Project a good review

See the report about the Elk Town Hall in the Mendocino Beacon.

Mendocino Beacon article about the Town Hall in Elk